The perfect egg free pumpkin chiffon pie is an amazing vegan pie to wow guests at all your next holiday gathering. It is gluten free, egg free, dairy free, and top 8 allergen free yet light as air.

This Egg Free Pumpkin Chiffon Pie is the quintessential fall pie in our house. The original recipe came with my partner and has been one he made for eons before I ever knew him. Until now it was a closely guarded secret to get his recipe. To him this recipe was to be kept secret at any cost! He would bring this to all the fall gatherings and anyone who hated pumpkin pie would fall in love with this recipe. It is light and fluffy. There are holidays where I feel stuffed but eating this pie is never too much!

Why Is This Pumpkin Chiffon Pie Recipe so Important to Us?

When we first got news that one of our kids was  diagnosed with EoE and had a ton of food allergies and restrictions THIS is the one recipe that the kids cried over not having. Luckily they have an amazing man in their life who made the pie over and over until he perfected the ratios to make it free from the top 8 allergens (except coconut in the whipped coconut cream). It took him a lot of work to get the agar agar just right. Too much and it makes the pumpkin mix granular. Too little and it melts into a puddle and won’t set.

This Pie Was So Special For Our Kids!

It was the first thing that let them see that they could still live a normal food life and eat the dishes they had loved and their friends eat. When we make this every thanksgiving, Christmas, and birthday the kids get so excited to not miss out on anything it makes me well up with tears. Yes, I said birthday. A different child (we have 4) asks for this for their birthday every year in the spring. One year it was all they asked for for presents.

Back to the Egg Free Pumpkin Chiffon Pie. It is a light and fluffy, melt in your mouth dessert. The meringue makes it airy and soft unlike most heavy pumpkin pies. It is a crowd pleaser.

Where we are this comes super thick. Stand your spoon straight up in it thick. If you are not in Canada or aren’t using the same brand as we do (can see it here) you may need to cook the mix a bit longer to thicken it. We have noticed that some brands in other parts of the world are really runny and ours really isn’t. You can use homemade puree from roasted baking pumpkins. We have but again it may change the cooking time based on how thick the purée is.

This doesn’t contain dairy. It isn’t actually cream. It is a byproduct of wine making and is a tartaric acid.

The liquid from a tin of chickpeas. When you are making falafels or our marinated chickpeas don’t throw the liquid gold chickpea water out. It can be whipped and used as an egg substitute in so many dishes. It keeps for around 72 hours in the fridge. If you buy dried chickpeas it is the cooking water you use, not the soaking water. You have to reduce the cooking water by at least ½ - ⅔ to make it that lovely thick consistency.  It should be well chilled for this recipe.

We like Bob's Red Mill but it isn’t safe for everyone. Ground flax or psyllium husk fibre, even ground chia will work too. You may need to add a bit more water to the slurry.

We have used a few different types here. Coconut gives the pie a different taste. In other words, unless you don’t have a suitable alternative, steer clear of it. Rice and oat milk work well here. You can also use your favourite type of dairy replacement in it’s unsweetened original flavour.

Check that the granulated kind available is vegan, some countries process theirs with bone char. Organic sugars are often suitable but do contact the manufacturer to be certain.

Directions on How to Make Pumpkin Chiffon Pie Filling

This recipe is a no bake recipe!

The first task is to mix the gelatin (or agar) with water and let it sit to thicken. A medium sized  heavy bottomed pot over low heat is used to combine Brown sugar, and the spices. Stirring is incredibly important at this step or the sugar will burn. Pumpkin is next to be added and mixed well to heat. The egg replacer slurry will be beaten with the vegan milk and added to the pot. Thickening the mix over low heat, stirring constantly.

Going From a Pumpkin Pie to a Chiffon Pie

Once thicker, remove the pot from heat and beat in the agar or gelatin mix to get the filling. Set the mix in a large bowl for 20-30 mins while cooling in the fridge. Beat the chilled aquafaba and cream of tartar with a mixer until stiff peaks form. By the tablespoon, add the granulated sugar until all mixed into the fluffy and shiny meringue. Beat until the cooled pumpkin mix has been set aside, until fluffy. The meringue is then folded into the pumpkin mix carefully before using the merangue and pumpkin mix to fill the cooled pie crusts. The filled shells will need to be in the fridge for over 8 hours to set. Serve with whipped coconut cream either homemade or from a squirty can like this coconut topping and dust with ground nutmeg.

Agar is a seaweed powder that thickens and gels. You can also get an agar gel but we haven’t worked with it. You will need to test it . Agar is used to make the dish vegan and also pork free. If you are using gelatin make sure your gelatin is free from shellfish as some can contain it, usually the kosher kinds.

It is really hard to whip cream without coconut. Aquafaba can be used but lots of icing sugar and cream of tartar is needed to get it both sweet and stiff enough to pipe on. The taste of aquafaba has less of a rich taste and whipped texture and more of a frothy feel and definite bean aftertaste.

Instead of pumpkin this chiffon pie could be made with chocolate pudding or coconut cream in place of the pumpkin. Other squash can also be used or mashed bananas. We haven’t tried a thick applesauce but would love to hear if you do.

You can use the egg free pumpkin chiffon pie filling in any crust you’d like. Our Crushed Cookie Pie base is super easy if you made our ginger cookies. Double the batch and make two crusts as well. We also use pre-made ”safe for us” gluten free  pie crusts we find at our local grocer in the natural foods aisle. This one we use often and can find it at our specialty natural foods grocers. Be sure to bake the crusts empty and let them cool (blind baking) before putting in the filling. Quick Tip—if you are using baking beans or weights make sure to have a set dedicated to allergen/vegan baking so there isn’t cross contamination. Check the label of the dried beans as they can sometimes carry a “May contain” warning or be cross contaminated, especially with wheat.

This pie does best when stored in a refrigerator, when needing storage. If left out it will not hold its shape well. When the whipped coconut cream has been added refrigeration will be needed for any pie not eaten immediately as coconut whip falls quickly at room temperature. It will keep for 48 hours covered in the fridge.

Other recipes you may enjoy

We hope you enjoy this recipe as much as we do and that it becomes one of your favourite holiday desserts. Please leave a comment if you try the egg free pumpkin chiffon pie. 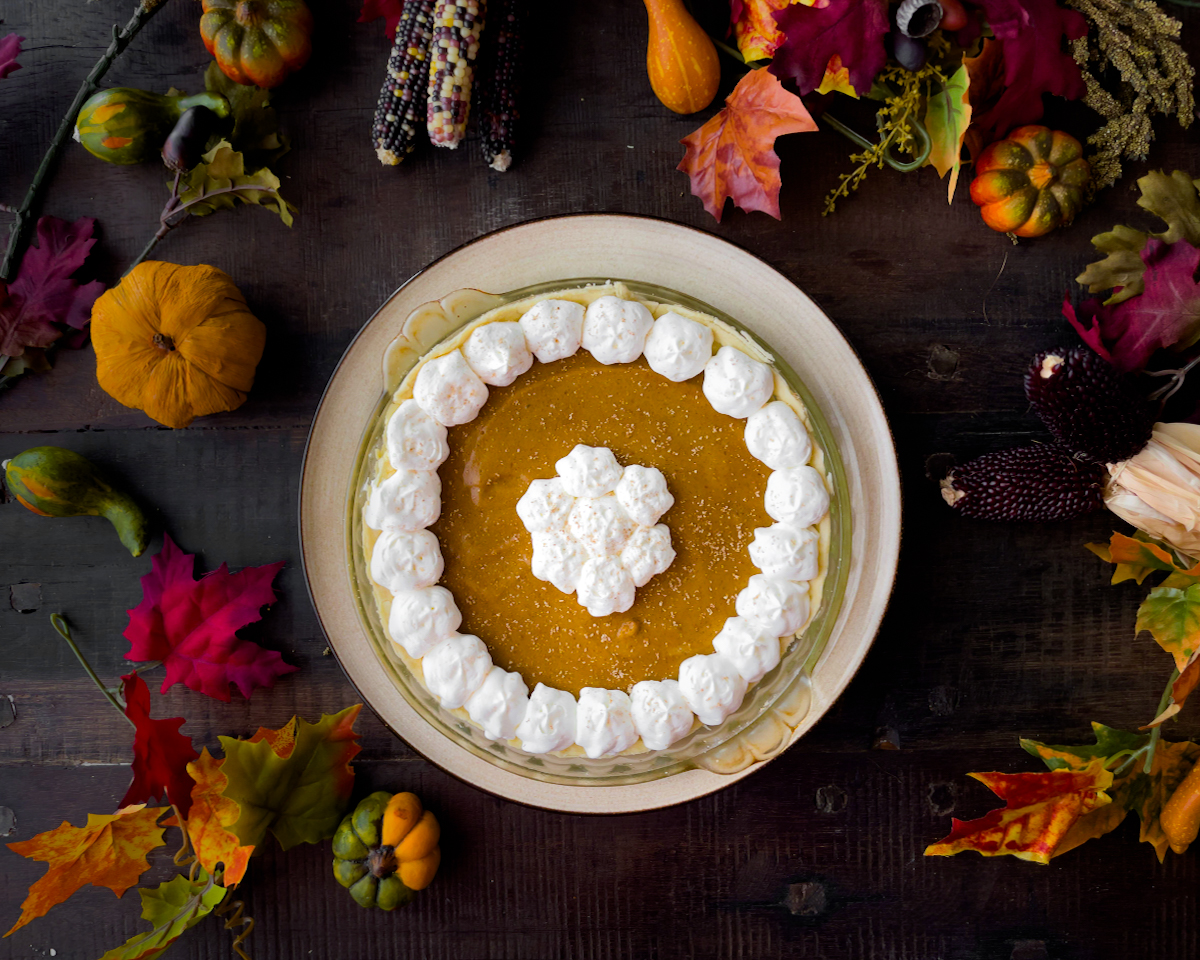 The secret to this pie is dusting a bit of nutmeg on the pie right before serving. Serves 16 or Filling for 2 - 9 inch deep pie shells. This recipe is for the filling only.

Have you made this recipe? Please leave a comment and us know how much you liked it. Cancel reply